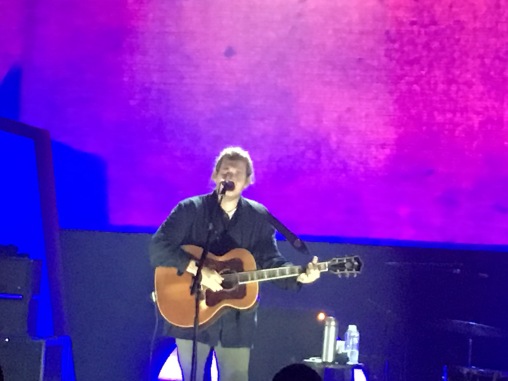 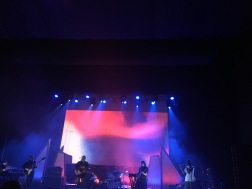 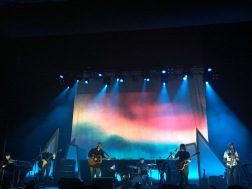 Last week, I had an opportunity to write for the Arlington Theatre as the Fleet Foxes performed.  Here is my latest piece.

“I feel like Jean Simmons!” Robin Pecknold of the Fleet Foxes shares.  “I’ve been taking voice lessons and my teacher keeps telling me to stick out my tongue!  So here I go, AHHHH!!”  There is a roar of laughter from the balcony that ripples all the way back to Robin.  Then, the bands’ keyboarder drops a zipper-like musical vibe and the Fleet Foxes begin to wow the house.

The Fleet Foxes new album, “Crack-up”, comes after a six-year hiatus.  It is clear, that their fans have not forgotten the potency of the unique fusion of music they create.   In their time off, these savvy musical magicians mastered pyrotechnic light effects and digital sounds matched with incredible drumming patterns and acoustic guitar, played by five band members.  This unusual combination draws perma-smiles out of the show-goer’s.

The Fleet Foxes’ musical capacity seems limitless and evokes the feeling of being on the ocean, during a ferocious storm.   There are unexpected elements coming towards you from all directions.  Eccentric instrument changes, subtle yogi-like background tunes as well as heavy intensity to both the lyrics and the musicianship behind them.  All these features wash over you as you try to absorb the layers of complexity this band has to share.

Fan-favorites, like Mykonos and He Doesn’t Know Why, Dreams and White Antelope become what Robin calls, his “Greatest market research,” as he observes the crowd yell for more.  When the band plays, White Winter Hymnal and Ragged Wood the entire theatre is on its’ feet, singing, throwing their arms around one-another, filling the space with a sentiment of companionship.

Perhaps the most spectacular moment of the show came when Pecknold’s vocals were reverberating through the vaulted ceilings of the Arlington Theatre as he played the solo, Tiger Mountain.  With only his acoustic guitar to accompany his bold and distinct voice, he sent a hush through the two-thousand person, sold-out show.

Pecknold and crew have left their mark on fans with their rich harmonies and dynamic finger-strummed guitars.  Towards the end of the show, Robin emotes, “I’ve learned a lot.”  We have too, Robin.  The “California Riviera,” as Robin tenderly called us while on stage, will not forget you. Completing their tour in early December, Fleet Foxes will likely be building a fan-base bigger than any companion crew they have ever had.

Photo-infused writer. Mom of 4 daughters, lover of all things authentic, passionate about what matters most in life. View all posts by annastump