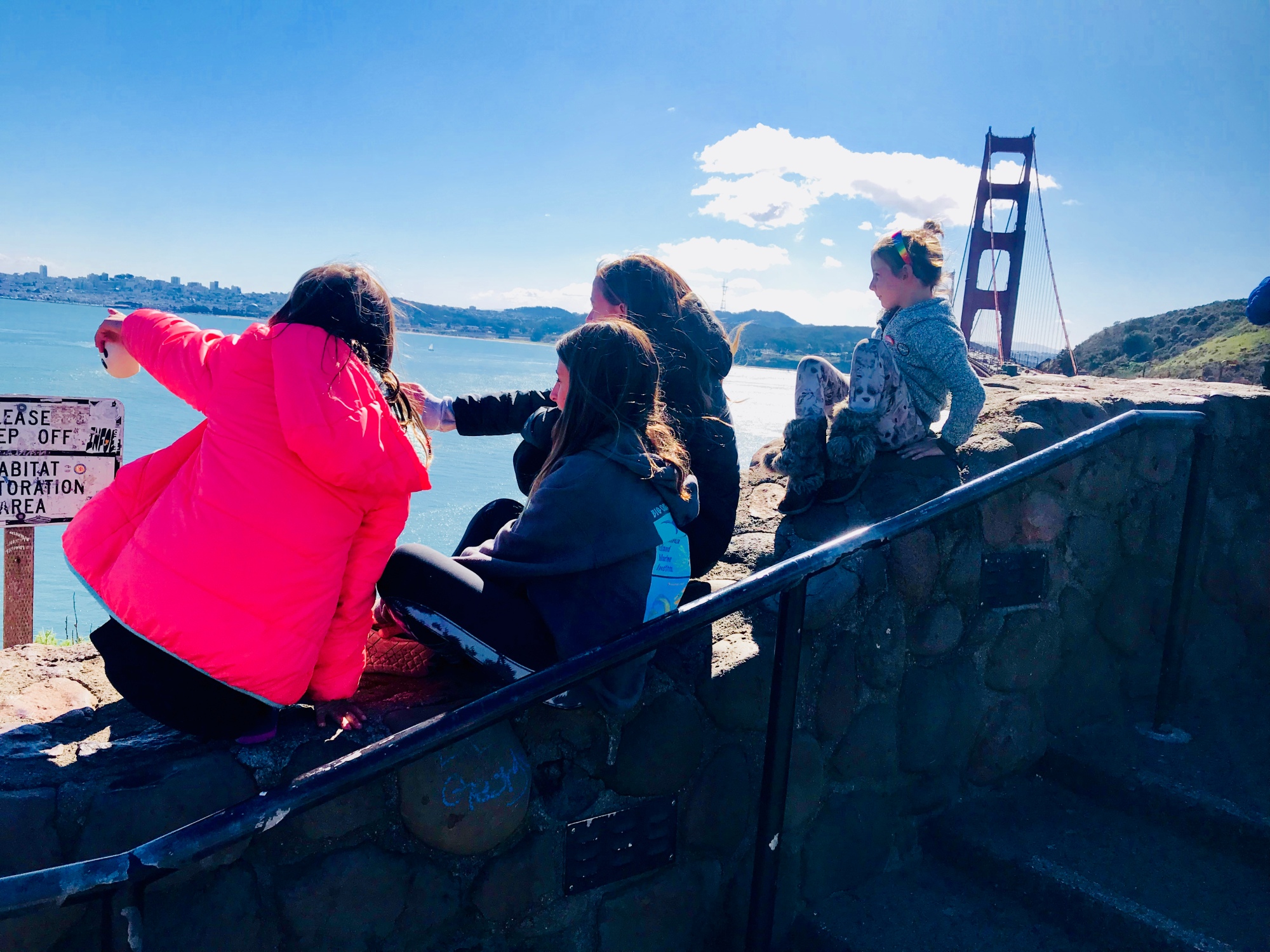 It hadn’t been the usual Christmas break.  We evacuated twice because of the Thomas Fire and we when we were in town, we were aimlessly finding one indoor, recreative location after another to take our minds off the imminent smoke.  When the sky finally cleared and our footprints no longer left ashy dust particles flying up to our faces, we headed to the zoo.

Ahhh the zoo.   And ahhh, the constant sound of squabbling siblings.  It was a looong winter break, pushed out to almost a month because of the flames approaching our city.  And as things heated up close to the county line, our four-pack began to light their own fires much more frequently than usual. I was at my wits end.  “Is this normal?”, I thought.  “Am I a bad parent?! When will this bickering cease?!  What did I sign up for and where is that Winter camp when we need it most??!!”

So, after landing at the giraffes’ enclosure, one sibling headed to the gorillas.  We followed, one daughter trying to pin me down with her sibling woes.  I pushed on, stopping at the meerkat cats and waving goodbye to the giraffes as she persisted to complain about her younger sister.  I thought, “Look at all these meerkats, huddled together, in such a small place, just looking delightedly happy?” I wanted to be a meerkat.

Upon arriving at the gorillas, we noticed two new, juvenile males.  We were told they were brothers, born in captivity, and who have remained together since birth.  One was in a deep slumber, sprawled out on the rocks with his massive muscles bulging.  The other, was somewhat hidden away in the corner of the habitat.  He looked utterly bored.  On all fours, he walked closer to the glass where we were standing and grabbed a handful of hay.  His incredible knuckles and dominant details of his profile right in front of us.   He looked at the hay, and then threw it over his shoulder.  Sitting there for a while longer, he spotted an empty potato sack from across the way.  Covertly, he approached the sack and grabbed it up.  THIS is when it gets good!  He looked down at the sack, then in an instant and without hesitation, he raised it high in the air like a flag and began charging and grunting towards his deep in sleep, brother.  He was on his back limbs only now, looking motivated and ferocious.  As soon as he approached his brother, he whapped him with the potato sack and kept running!  The brother, stood up from his slumber immediately, clearly aggravated by his brother’s actions and began grunting and chasing after him.  He couldn’t catch him and eventually, just laid back down to try to settle himself again.  The potato sack whapper, now hidden out in a protective corner, looked simply satisfied!

I just smiled.  I felt immediately better.  It’s strange how emotions can be so flighty!  But I felt so much gratification knowing that sibling debacles are primal.  They are truly part of the mix!  OMG.. it’s like when an expert child psychologist told me to get the right connections with our kids, we only need to get it right 30% of the time.  What a relief!!  30% of the time?!  This is doable!

It’s pretty primal to want to push your sibling’s buttons.  As parents, we just have to nurture a way for our kids to be back in connection with their siblings after a potato sack whap-down.  We don’t have to manage all their disgruntled complaints of each other, but we do have to listen enough to see where there has been a breach in trust, by words or actions, so that we can help the brothers or sisters re-connect and find their way back to their loyalty with each other.

And if we, as parents, max out from sibling dismay, that’s ok!  We can be like the meerkats, with our heads held high in the air, just looking completely content with whatever is happening in front of us.

Photo-infused writer. Mom of 4 daughters, lover of all things authentic, passionate about what matters most in life. View all posts by annastump